The downtown building reflecting a real upper-class elegance was built in the 1860s based on the plans of József Hild. The prominent figure of Greek Revival style architecture designed and built several hundreds of houses, a number of which are nearby. The mentioned palace is one of its late works that was finished after his death by the architect Lőrinc Zofahl in an early eclectic style. The first principal was probably the tradesman Albert Spitzer. 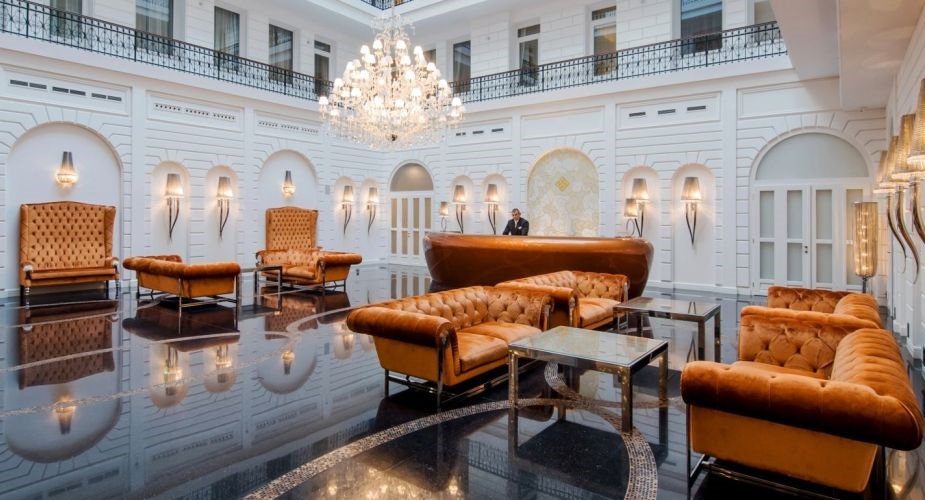 After termination of the residential function of the building, it was used as an office building. In 2004, the yard parts were demolished by keeping the street wing of the building, based on the plans of Zoltán Porcsalmi, and the house was reconstructed with a new reinforced concrete structure. The planned residential building was not realized, only its skeleton was finished. In 2014, the hotel development was started based on the plans of Péter Hegedűs and Ágnes Bolyó by keeping the values of the building, however, tailored to the demand of the 2000s.

The interior plans of the new hotel were developed by Virág Vörös, Csilla Sáfrány and Tünde Bagyinszki Kiss. The specialty of the house is that, regarding its design, the typical Monarchy character was kept, so the rooms open from a six-story inner floor, which offers an impressive look to the special inner space. The interior designer brilliantly combines vintage style with modernity, classic peacetime elegance, and the latest technical achievements regarding design and furnishing both the rooms and common areas. The rooms are dominated and the eyes spoiled with IPE Cavalli furniture, Swarovski crystal chandeliers, hand-painted English silk wallpapers, floor covering strewn with bronze grains, premium quality Harlequin Leonida Velvet textiles.

The upper-class, yet clear design characteristic for the building of Prestige Hotel Budapest, the huge inner spaces, the gorgeous interior appearing in black and white required an individual designing also by the uniforms.

The specialty of the uniform collection combining upper-class style with today's trends is a clear style. The uniforms of all hotel positions fit harmonically to each other but they have a characteristic look also by themselves. The individual areas are organic parts of the harmonic overall picture. Everything is chiseled down to the smallest detail, the style elements can be found on different parts of the collection. The coloring of the uniforms is based on the black and white dominance determining the color world of the hotel interior.

Our hotel opened its gates in April 2015.

There is a relaxing area and also a conference room at the hotel, so it can serve guests both as tourist and business travelers coming to Budapest.

A unique discount in Prestige:

What do you need to do to get our unique promotional code?

There are 3 easy steps to follow and we will send you our unique code via email:

We use cookies on our website to ensure that we give you the best possible experience. Further information